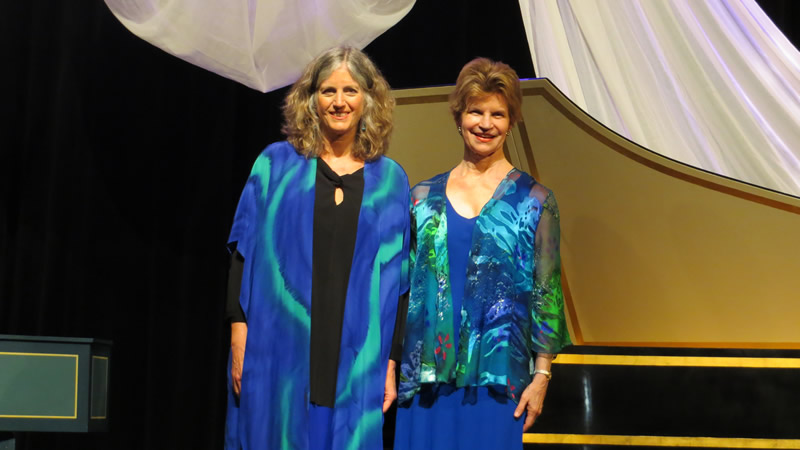 Harpsichords. As recently as sixty years ago, there were hardly any historically informed harpsichords to be had. The "revival harpsichords" of the early twentieth century were based on the nineteenth-century iron-frame pianos of the Pleyel factory and others. The great Wanda Landowska played such instruments. Other builders, such as Neupert and Sabathil, were making instruments that had little relationship, in construction or sound, to historical instruments. Then, in the later 1940s and the 1950s, Frank Hubbard and William Dowd partnered to produce amazing historical instruments, such as the French double, modeled on Pascal Taskin, that they built in 1958 for Ralph Kirkpatrick. His recordings and concerts on this instrument (the present writer heard him at the Nelson Room at Duke in 1967) were earth-shaking.

Their work has inspired so many builders since then, allowing concerts such as this one to be possible.

A number of nodes converged in this program of music for two harpsichords. Most visually obvious was the convergence of two handsome harpsichords – the Music House Franco-Flemish double by Richard Kingston and a French double (modeled after a Taskin at the Smithsonian) by David Dutton.

Next convergence – the friendship and professional association of the artists, Elaine Funaro and Beverly Biggs.

Another convergence was the musical association of Friedrich Augustus I of Saxony and his court musician Peter August.

What completed the circle was the parallel interest in music for two harpsichords, shared by all four players.

It is said that Friedrich Augustus delighted in playing the harpsichord but was so shy that he never performed in public and may not even have performed for his family, preferring to play in private with August. Funaro and Biggs are by no means so shy, both being extremely competent concert performers.

In looking for suitable duo-harpsichord pieces, Funaro discovered an arrangement by August for two harpsichords of Haydn's Piano Concerto in D, Hob XVIII:11. Funaro reported that she called Biggs and said, "I've found what we were looking for!" More about this piece later.

In these times, it is relatively easy for performers to have access to good quality instruments in plurality. Biggs has her Dutton, Funaro has both a Kingston double and a Dowd double, and the Music House keyboard collection includes the above first-mentioned Kingston.

The delights of these convergences included the pieces on this program. Two were by Ignace Pleyel (yes, the same Pleyel who founded the piano firm) and two by Franz Joseph Haydn himself. All these pieces, arranged and transcribed for two harpsichords, for Augustus, by his court musician, survive in the collections in Dresden and were chosen for Baroque and Beyond by the artists.

The first piece on the program was Pleyel's Quartetto in F Major. The Allegro moderato is a fluffy mincing piece; although both players were a little tense to begin with, they had one spirit, and the performance was seamless. This is silly court froth, with an impressive big ending. The Variazioni moderato provided plenty of opportunity for lovely expressive playing.

Next, Haydn's Quartetto in F (Hob. III:35) of 1774 was a strong and serious contrast to Pleyel's lightweight music. The Adagio allowed for lots of keyboard changes and showed off the different color of the various combinations of choirs and players. The Menuetto was beautifully and stylishly played, with one heroic clam at the end: major or minor? But the one in error so assured came down on the right note that the clam sounded almost like a grace-note. Haydn's typical sunlight major shown through in the Moderato.

Then Pleyel again, with a Quartetto in D. There was lots of demanding playing required in this, and Funaro and Biggs were the consummate duo, although the Pleyel was nothing to get excited about, in three movements: Allegro, Amoroso, and Rondo Presto.

Mercifully, the evening closed with some serious substance: the opening Vivace from Haydn's well-known Piano Concerto in D, Hob. XVIII:11. The playing was delicious and precise and ended the evening on a very positive note.

This program was repeated in Chapel Hill.