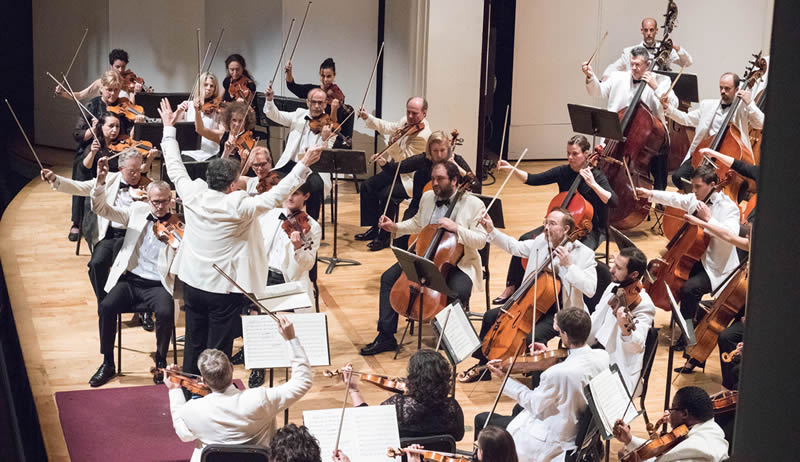 The audience waited in vain for the strains of Bluegrass to announce the body of STOMP, the full orchestral version of a 6-minute piece for solo violin written in 2011 by American composer John Corigliano for the Tchaikovsky Competition in Russia. As the lovely string incantation reached its conclusion, it became clear that the program had been changed without prior notice. Composer Ron Follas enlightened me at intermission – the work was "Voyage," a string orchestra transcription of a work originally for a cappella chorus, based on one of my favorite poems, L'invitation au voyage, by French poet Charles Baudelaire. According to the composer, the work "pictures a world of obsessive imagination – a drugged version of heaven, full of sensual imagery. The music echoes the quality of the repeated refrain found in this lush translation: 'There, there is nothing else but grace and measure, richness, quietness and pleasure.'" Indeed, it was a charming and touching piece even if my perception of it was somewhat altered by the anticipation of a foot-STOMPing fiddle tune!

Concertmaster of the Eastern Festival Orchestra in the summer and of the Florida Symphony Orchestra during the rest of the year, violinist Jeffrey Multer is in great demand as a soloist with a plethora of orchestras and chamber music sites. His performance of the iconic Violin Concerto in D, Op. 35, composed by Tchaikovsky in 1878, left only the question of how long it would be before his schedule as a soloist removed him from the orchestras he leads so well! As tall and slender as a modern Paganini, Multer projects a lovely tender tone with a warm vibrato throughout the register of the violin. Brilliant bow-work in the numerous technical passages and particularly in the build-up to the conclusion of the concerto brought the audience to its feet, with the many Eastern Festival students cheering their teacher vociferously.

In addition to the brilliant playing of soloist Multer, I cannot leave unmentioned the outstanding performance of the orchestra, under the enlightened direction of legendary American conductor Gerard Schwarz, artistic director of the Eastern Music Festival and conductor of the Festival Orchestra. As a colleague commented, "This orchestra really plays the dynamics as they're written" rather than the sloppy, loud-ish version typical of most orchestras. Whenever Multer was playing, not only was his sound "front and center," but the interwoven contrapuntal and soloistic woodwind commentaries within the musical fabric were sparklingly clear, while the harmonic backdrop of sustained chords provided the musical context. By contrast, the orchestral tuttis were powerful and bold. This was an outstanding concerto accompaniment!

After intermission, the stage of Dana Auditorium was filled to capacity as the 52 string players were joined by 53 woodwind, brass, percussion, keyboard and harp players, all called for by the score of Gustav Mahler's Sixth Symphony, dubbed the "Tragic" Symphony, a description not his, but one that Mahler seemed to like. Not only are symphonies by Mahler large in the number of musicians needed to play them, but they are large and profound in concept and often long, with seven of his nine completed symphonies lasting more than an hour. The Sixth Symphony is filled with surprising contrasts of tempo, mood and dynamics. Sometimes one pictures the composer in an alpine village soothed by distant cowbells, but a moment later a fit of anger and a sudden outburst of energy changes the mood entirely.

There is some confusion about the preferable order of the four movements that constitute this symphony. Almost all the published editions have placed the Scherzo second (as pioneered by Beethoven in his 9th Symphony and by Berlioz in the Symphonie Fantastique), and it is probable that this was the planned order in Mahler's mind. However, the nearly identical mood, theme and tempo of the two movements create problems for performance, especially since both themes are heavy and dramatically insistent. One solution is to reverse the order of the Scherzo and the Andante, which is consistent with tradition, and also the option chosen by Maestro Schwarz. And this is what Mahler himself did in the first performance. However, both versions have been common to this day.

Another debatable question concerns the hammer blows in the last movement. Mahler wanted the hammer to strike like an ax, striking a blow of fate. Originally there were three blows, but in most published scores, the third blow is absent, probably in deference to the wishes of Mahler's widow, Alma, who thought three blows served only to tempt fate. Most conductors now have reinstated the third hammer blow, to the perverse delight of audiences, who await the immense wooden mallet with its four-foot handle, swung high over his head by the lead percussion player, standing on a platform beside a gigantic wooden box.

The performance was outstanding, with crisp rhythms and well balanced tuttis in the first movement, dulcet and soothing strings in the warmly charming Andante. The sinister Scherzo reinstated the insistent mood of adversity of the first movement, charmingly relieved by the simplistic trios with their off-kilter childish rhythms achieved by the use of mixed meters.

The Finale is considerably longer than any of the other movements and encompasses many moods, leading to the three strokes of fate, the last of which "cuts down the hero like a hewn tree," in Mahler's own words. There was a bit less attention to detail as fatigue dulled attention, but the solo playing was outstanding and never flagged. Particular praise must be directed to the exquisite horn playing of Kevin Reid with solos in every movement. The strings, under the leadership of associate concertmaster, Nigel Armstrong, were outstanding throughout the concert. But the highest praise must be directed to Maestro Schwarz who led with power, precision and oh-so-much subtlety!

The Eastern Music Festival now enters its last week for this season, with concerts daily. Thursday night features the students who won the EMF Concerto Competition; Friday night each student orchestra plays a work, Death and Transfiguration by Richard Strauss, and Daphnis et Chloé by Maurice Ravel. The Festival Orchestra, under the direction of Schwarz, premieres Schwarz's orchestration of a youthful work of Anton Webern, Cuban-American piano virtuoso Horacio Gutiérrez plays Brahms' Second Piano Concerto, in B-flat, and the orchestra closes with the majestic Alpine Symphony by Strauss. See our calendar for details.