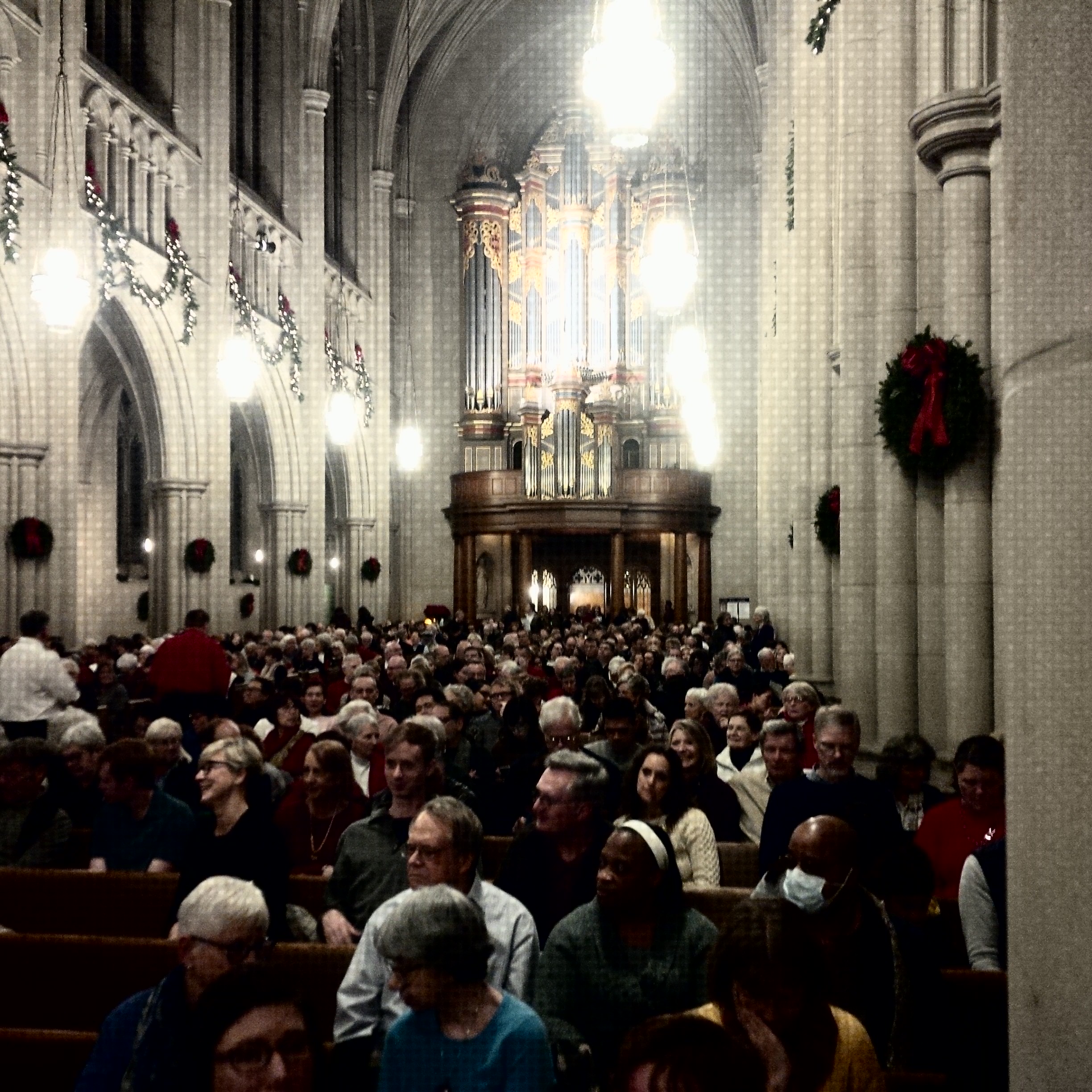 The campus was largely deserted but Duke Chapel was wall-to-wall with people as ushers looked for single seats to tuck in more and more individuals prior to the annual holiday concert by Durham's esteemed Vocal Arts Ensemble, dubbed "O Holy Night" (although there was no music by Adolphe Adam in the lineup). These programs are the chorus' gift to the community which has embraced its artistry and grace for a quarter of a century since Rodney Wynkoop first assembled the elite aggregate of the very finest singers and choral directors in our region – folks who recognized that the resulting VAE provided them the best opportunity to enhance their own individual skills and abilities while making exceptional music with their peers. It was a winning formula. Yes, there are other professional choirs hereabouts – Greensboro's Bel Canto Company is its senior by a decade, and the NC Master Chorale's chamber choir is its near contemporary – but one thing the VAE has that the other's don't is ongoing access to the region's most spectacular and inspiring venue, and in addition, it's almost certainly safe to say that no one has better mastered – tamed, perhaps – the chapel's substantial reverberation and otherwise challenging acoustics than the VAE's founding conductor.

This year's program, performed by an ensemble of 35 – including pianist and bass David Cole – embraced not one but two versions of "Welcome, Yule!," the second of which was composed by Wynkoop's successor as Director of Chapel Music, Zebulon H. Highben, to whom due honors were rendered at the start of the concert's second half. The first half encompassed some rare and intensely beautiful "serious" fare that was almost without exception profoundly inspiring and moving, particularly given the magnificence of the singing, distinguished by all the fine hallmarks of great choral work that Wynkoop has exemplified here for so long. We may never take this art for granted, so it's worthwhile reflecting on how much work goes into it, but he makes everything seem as natural as breathing, so what one remembers is the sheer beauty as the individual pieces unfold – introductory music by Parry and then works by Howells ("A Spotless Rose"), Dan Forrest, Frank La Rocca, Dello Joio (Egad, what a roster! – that's a statement, not a title...), Alan Bullard, Poulenc ("Videntes Stellam," with amazing foreshadowing of Dialogues of the Carmelites), Ledger ("The Bell Carol"), and Paul Ayres – all full-fledged original compositions, not arrangements…. One must note that the printed program was/is also a class act, listing all the info one might want or need about the music and providing texts and translations for everything – but so pure, so refined was the singing, surely few listeners needed the supplemental printed material.

Part two brought generally lighter and more familiar fare, but the levels of presentation remained so breathtakingly high that one listened in amazement at the care lavished on – for example – "Winter Wonderland" (yes, toward the end of the show…), to the extent that the crowd remained rapt and spellbound, even then. A highlight of this portion was the premiere of Edwin Fissinger's brief "Star of Morn." The encore ("Love Came down at Christmas") was by this composer, too – and his music will be heard again during the VAE's 25th anniversary concert in June – stay tuned. (Some of us older folk found it particularly moving that Wynkoop gave such prominence to this music by a fine composer and choral conductor whose life was largely devoted to work in academe – at North Dakota State U., to be specific.)

This seond half began with Highben's "Welcome, Yule!" and then extended from arrangements by Parker/Shaw, David Blackwell, Bob Chilcott, and John Rutter to some remarkable items surely new to some of us – Bullard's "Scots Nativity," for example, and Chilcott's "Pilgrim Jesus." Other old wine in new bottles included most notably the unexpectedly lovely setting of Prætorius' "Lo, How a Rose E'er Blooming." A highlight here was an arrangement (by Chilcott) of the traditional Polish carol "Lullaby, Jesus," with a trio of soloists from the choir.* Then, at the end, there was Steven Sametz's "Gaudete," complex, multi-layered, amazing to hear, and polished like a great little gemstone – all capped by the Fissinger encore. No Handel this time, but we must end with "Hallelujah!"

*Solos were by Alex Engler in the Howells, D. Thomas Jaynes in the Rutter, and Patty Phillips, Jennifer Myers, and Chad Kearsley in the Polish carol.

For the convenience of our readers, here are the times of the Chapel's Christmas Eve services: 2pm – Children's service; 4pm – Worship service; 6pm – Worship service with Holy Communion & 11pm – Lessons and Carols. (Note: All are welcome to sing in the community choir during this service. There is a required rehearsal prior to the service at 9pm.)