So There's a Lot More to Handel than Messiah – Like 24 Other Oratorios, etc. 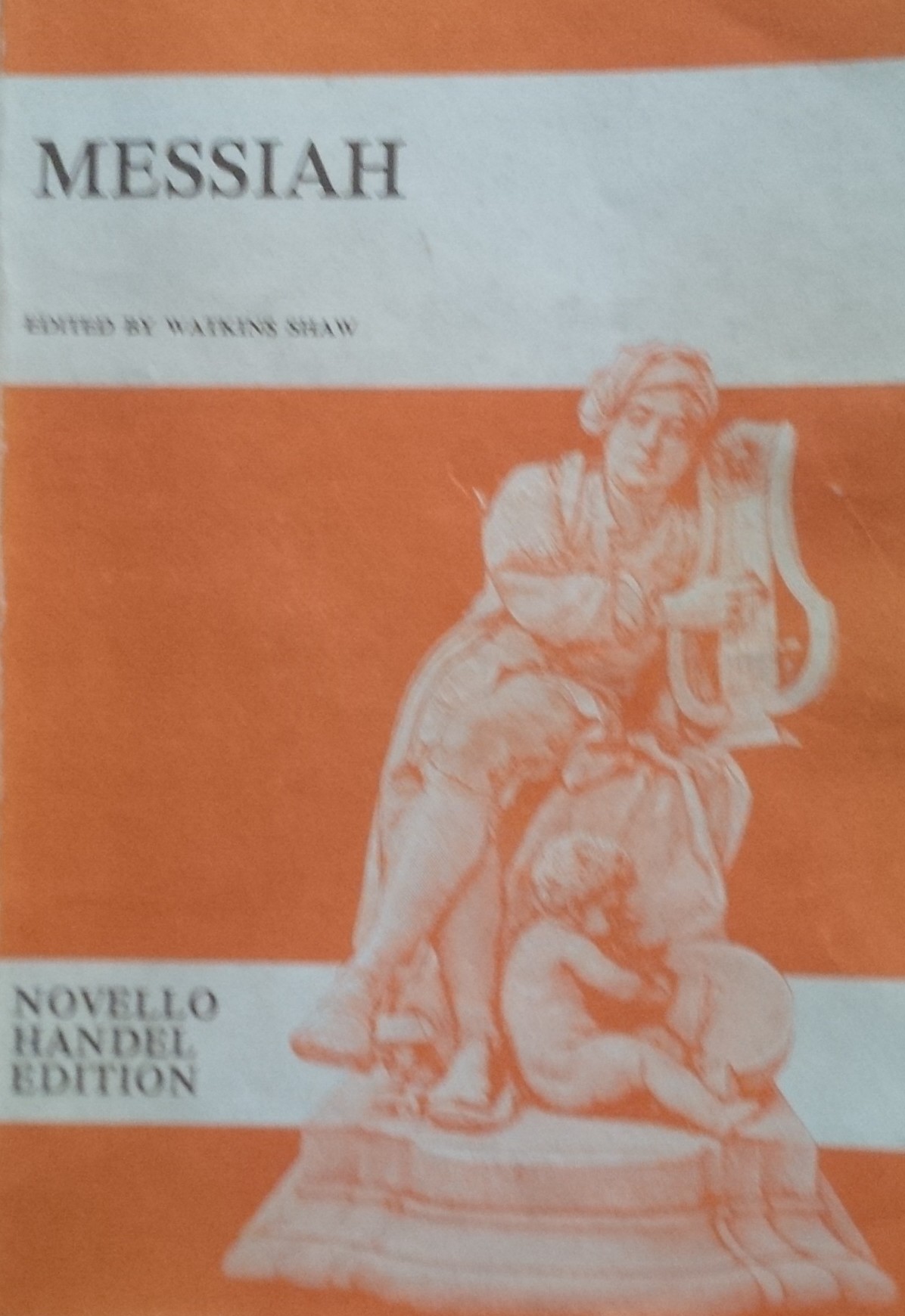 Two of George Frideric Handel's oratorios – Messiah and Judas Maccabaeus – have achieved pop status, but all of them are worth hearing, and each has its own special merits, artistically. Folks who doubt this are missing some glorious listening. Why wait? Here's a list of all of them with links to (free) YouTube performances (some are only audio files, others are video also). As we've noted previously, readers may readily download Y-T items with the handy freeware described in the second part of this article. So check out the ones you don't know. And if you're unsure where to begin, let us suggest An Occasional Oratorio, which celebrates in music the truly gruesome slaughter that took place at the Battle of Culloden – because, well, why not? – as someone must have said to Handel (1685-1759) at the time he wrote it.

A lengthy aside: Speaking of battles, back in the late '60s, your humble scribe was a member of what he affectionately calls Uncle Sugar's Canoe Club. In the 1968-69 period, when all hell was breaking loose over here because of the draft, Nixon, riots in Chicago, etc., etc. (see? there's never any new news), the heavy cruiser USS NEWPORT NEWS (CA148) deployed to Vietnam. Aboard, among the thousand-person crew, were several kindred spirits – the budding Stuart Davis scholar who was, later, to build SFMOMA's new facility; a fabulous jazz pianist and improviser who was to make a significant mark on musical theatre in north central Florida; and yours truly. The three of us – plus the ship's assistant dental officer and our very own resident counselor at law (whose official function was to keep the rest of us from violating any serious Naval regulations...) – established in the plush confines of the forward junior officers' bunkroom an august drinking club we called The Handel and Haydn Society in Newport News.* Of course there was no actual drinking on the ship – Josephus Daniels had put the kibosh on that – so even today I am at a loss to explain how all of the ship's commissioning whiskey evaporated during that cruise… – but there may be a clue in the fact that the good doctor – who was concurrently the ship's Jewish chaplain – had custody of the key to the liquor locker….** Our cover, such as it was, was our interest in the music of – are you ready? – Handel. And Haydn. Played on Japanese tape recorders we'd all bought at the Naval Exchange in Subic Bay. Really.

Now returning to the subject at hand: Read about Handel and find out more than you may wish to know here. (Did you know the Handel house is tied in to Jimi Hendrix? Look here.) The classic studies of the oratorio – including of course Handel's – are in four extensive volumes by the late UNC scholar Howard Smither, linked here.

Most if not all of the scores are in IMSLP, but the most recent scholarly editions are not in the public domain. For those, work through this site of Bårenreiter, here or the Håndel Gesellschaft, here.

The latest in research and the people conducting it is here.

The operas are problematic, since they didn't all survive intact and not all of them have been recorded. There are 42, more or less. Serious collectors can with relative ease make a stab at hearing most and seeing some of them (but beware the far-too-many Eurotrash productions on the market); there are often new additions to the list of available CDs or videos. Meanwhile, here's a tabulation of all of them, including the pastiches listed in the Handel catalog.

The format parallels what we've done before, with some slight changes: HWV catalog number, title with embed, premiere date and location, librettist(s), text (libretto), notes. (Links to libretti are provided under "Stanford.")

No more excuses, now. Read the Good Book (on which some of these sacred works are based) and pop in those ear-buds. Now!

HWV 48 Brockes Passion 23 Mar or 3 Apr 1719 Hamburg Cathedral (possibly) Barthold Heinrich Brockes. The libretto 2:30:26 https://www.youtube.com/watch?v=Rxw1DJVUPQo (conducted by Stephan Schultz) (This is the most Bachian of Handel's oratorios – but it pre-dates Bach's passions by at least four years…. See footnote.)

HWV 53 Saul 16 Jan 1739 King's Theatre, London Charles Jennens Stanford 2:29:51 https://www.youtube.com/watch?v=lSTHAFIyXNM (conducted by René Jacobs). Note: Of course the point of oratorios was that they weren't staged, but here's a fine staged version of Saul nonetheless, and with an admirable local connection. It was produced at Trinity Church Wall Street in 2015, and the first solo voice is that of Chapel Hillian Molly Quinn: 3:04:40 https://www.youtube.com/watch?v=b2L41oHvijw (conducted by Julian Wachner; among the stars is Durham native Anthony Roth Costanzo)

HWV 62 Occasional Oratorio 14 Feb 1746 Covent Garden Theatre, London Newburgh Hamilton Stanford. 2:26:31 https://www.youtube.com/watch?v=QYsuAZ-35OI (conducted by Howard Arman). For its sheer Handelian grandiosity, this is the personal favorite of the compiler of this article.

An untitled pastiche (pasticcio is the Italian singular) entirely by Handel was prepared in 1738 by the composer himself for a benefit for himself and premiered on 28 March 1738 at the King's Theatre, Haymarket, London. It is a bilingual pasticcio, including music from Deborah (HWV 51), "As pants the hart" (Chandos Anthem No. 6; HWV 251b), a Coronation Anthem, and organ concertos. Not known to have been recorded.

Four others are detailed here:

Oratorio (pasticcio) Rebecca 4 Mar 1761. See https://en.wikipedia.org/wiki/John_Christopher_Smith, from which, note: "Between 1759 and 1768 [John Christopher Smith] directed the annual performances of Messiah at the Foundling Hospital, where he was organist. Paradise Lost, first performed on 29 February 1760, was his greatest success, with words by Stillingfleet after John Milton; four later ones, all performed at the Royal Opera House in Covent Garden, were largely reworkings of Handel's music: Rebecca on 4 March 1761 on a text by Stillingfleet, Nabal (16 March 1764), Tobit (1764), and Gideon (10 February 1769), all three on words by Thomas Morell. Information on three other oratorios is scarce: Judith on words by Robert Price, Jehosaphat, and Redemption on words by William Coxe, The latter was discovered at the Bibliothèque Nationale de Paris in 1998." Not yet recorded.

Bach's Passions (for the record):

The St. John Passion, S.245 is the first Passion Bach composed during his tenure as Thomaskantor in Leipzig, a tenure that started after the Easter season of 1723. Apart from the German translation of parts of the Gospel of St John and several Lutheran chorales, it used text of the Brockes Passion for its arias. The Passion was performed on Good Friday of 1724, 1725, 1732 and 1749. https://www.youtube.com/watch?v=1tm27tmfEAY

The double chorus St Matthew Passion, S.244 was composed on a libretto by Picander for Good Friday of 1727 and/or 1729. After revision the Passion was performed again in 1736 and 1742. https://www.youtube.com/watch?v=XC1ECy1HvFQ

St. Luke Passion, S.246, Bach's copy of an anonymous St. Luke Passion, was published in the Bach Gesellschaft Complete Works (vol. xlv/2) but is regarded as spurious, with the possible exception of the introduction to the second half. https://www.youtube.com/watch?v=QNaJ6lb0RjY

Bach wrote the St. Mark Passion, S.247, for performance in 1731. Picander's libretto for the Passion was once thought to have been destroyed in the bombing of Dresden in World War II, but the recovered copy seems to show that the work was a parody of music from the so-called Trauer-Ode, Laß, Fürstin, laß noch einen Strahl, S.198, and that some choruses were used also in the Christmas Oratorio, S.248. There are several reconstructions of the Passion. https://www.youtube.com/watch?v=mUELlzD6ezw

*Do not mistake this little group with those upstarts in Boston, the Handel and Haydn Society.

**Now that I think of it, here may have been some snakes on the ship; if so, then the booze was indeed used for medicinal purposes......