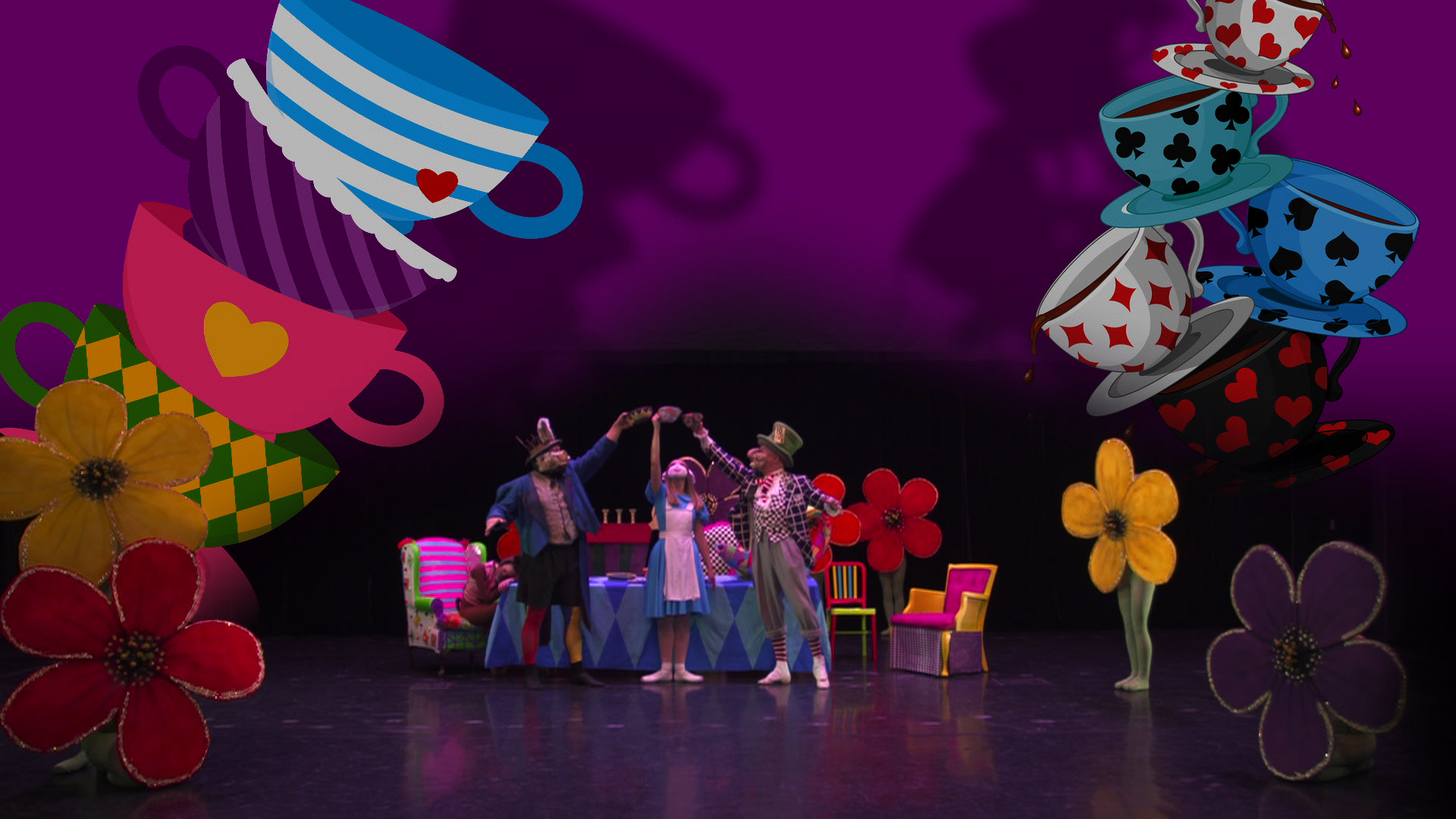 Charlotte Youth Ballet auditions young dancers in the Charlotte region for its two annual shows, a Nutcracker and a spring storybook ballet, which are usually performed at the Halton Theater of Central Piedmont Community College. Additionally, CYB often features professional dancers in principal roles, which allows the opportunity for students to work within a professional setting. This year's Alice in Wonderland video featured mainly students along with local star Hardin Minor, a graduate of the UNC Charlotte Dance and Theater departments, who is known for the many (literal and metaphorical) hats he wears as mime, clown, and dancer. Minor, who annually plays the role of Herr Drosselmeyer in CYB's Nutcracker, doubled as the Mad Hatter and Alice's father.

Alice (Norah Miller) and her father introduce the story as they promenade by a creek. Alice's father begins to read to Alice who promptly falls asleep, drifting into her dream wonderland. The setting was created by a mixture of virtual and physical sets and props: A blue flowing cloth provided a lovely creek, while cartoon shrubs and flowers framed the screen. The incorporation of the two – virtual plus physical – worked well and was reminiscent of a kid's show like Blue's Clues, where cartoon and real are distinguishable, but integrated in a lively way. For example, one particularly nice use of this concept was at the very beginning when Alice chases a cartoon orange monarch butterfly with her real net (she barely misses it and it flies away).

After falling asleep, Alice is awakened by a group of cute little white bunnies (the youngest, apprentice dancers) who hop and skip and lead in the White Rabbit (Gracie Durham), whom, you might have expected, is running behind schedule. Durham danced with lots of pep in her petit-allegro jumping steps, as Miller watched in graceful interest. Alice then falls down the virtual rabbit hole to be confronted by a row of lovely pink and purple doors of all sizes. A table downstage-left contains a key (which Alice tries on each door) and some snacks ("Eat-Me"/"Drink Me") for later. While there was certainly nothing wrong with these physical sets and props, it might have been nice to incorporate some virtual/cartoon props during this sequence – maybe a couple of the doors or the key or something – just to reiterate the kid's show theme, as established by the opening. Visual editing effects did continue, however, most notably when Alice changes sizes, shown in comparison to the smaller-then-larger Rabbit on her left by sewing what appeared to be two videos of differing perspective together, side-by-side.

Alice's journey into the forest of flowers provided perhaps my favorite use of physical props/costuming (by Valerie Roller and Kimberly Stacey, respectively), where large purple, yellow, and red flowers stood on pairs of legs, which, dressed in bright green tights, acted as stems. This proceeded a waltz of pink flowers and preceded a dance of monarch butterflies, each group movements, which were danced with nice uses of the stage and a reincorporation of the cartoon setting idea (flowers framed the screen).

As Alice continues her journey, she meets the Mad Hatter, the Queen of Hearts, cards painting roses red, and the Cheshire Cat, among others. Technically speaking, dancers overall could have used a little more extension of the limbs in order to fulfill lines with maximum energy, as well as more use of their "turn-out," meaning a use of the legs and feet in a way that builds strength in the rotator muscles and produces an effect where the heels appear turned in towards the center of the body while the toes point outwards. That being said, the dancers were strong in characterization, even while each was masked in coordination with their costume.

In the end, Alice wakes up and enjoys a picnic with her father. A quote from Lewis Carroll's Alice Through the Looking Glass appears on the screen, reading, "A dream is not reality, but who's to say which is which?" This quote was especially relevant today, as our sense of time still feels like that of limbo, and our virtual and physical realities, like in CYB's Alice, are so connected, sometimes it's hard to tell "which is which?"

Tickets for CYB's Alice in Wonderland are available for on-demand viewing through June 5th. Please see the sidebar for more details. And to read the preview, click here.