The Little Theatre of Winston-Salem's Marvelous and Intimate Miss Bennet: Christmas at Pemberley 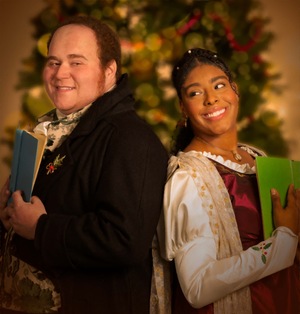 Opening night of The Little Theatre of Winston-Salem's production of Lauren Gunderson and Margot Melcon's Miss Bennet: Christmas at Pemberley at Reynolds Place Theatre in the Milton Rhodes Center for the Arts marvelously brought the holiday spirit to the beloved Bennet sisters of Jane Austen's novel Pride and Prejudice. Set in the holiday season of 1815, two years after the conclusion of the classic tale, the charming and witty play, directed by Steffanie Vaughan, explores themes of family, sisterhood, love, and happiness as bookish middle sister Mary Bennet defines herself, embracing her independence and discovering true love along the way.

At the Pemberley Estate, the Bennet family gathers to celebrate Christmas together. As written by Austen, Elizabeth (Jessica Perry) and Jane (Kayla Guffey) are as joyous and regal as ever, Lydia (Apolonia Mia Alba) as spirited and flirty, and Mary (AlexAndriA Grace Porter-Phelps) as learned, literary, and sophisticated. Unlike her sisters, Mary is unmarried and, though tiring of such a role, she is affixed as the obedient and dutiful middle sister fated to care for Mr. and Mrs. Bennet. It is not until the arrival of an unexpected guest, Lord Arthur de Bourgh (Graeme M. Taylor), that Mary recognizes her eagerness to break away from her tedious days of pianoforte and reading and embrace her desire for independence, an intellectual partner, and romance.

The play itself is comical, tailoring Pride and Prejudice and its characters to the modern day while preserving the traditional atmosphere, sophistication, and language of the Regency Era. The cast, with their expressions and punctuated remarks, conveyed such comedy with ease. The presence of a Christmas tree provided a recurring avenue for comedic comment; though not embraced in England until further into the 19th century, Mrs. Elizabeth Darcy decided to adopt the German tradition for the season. Each character remarks on the tree, some critically, notably that of Miss Anne de Bourgh (Christina Wheeler), and some complimentarily. The spruce tree is an object of comedic commentary throughout the play, but it represents and reminds the audience of a traditional modern Christmastime.

Just as in Austen’s original story, the Bennet sisters are centered in the sequel, with the notable exclusion of Kitty Bennet, who is traveling with her aunt and uncle until Christmas Day. The women in the cast stunningly captured the billows of sisterhood as characters passed occasional judgement and engaged in sisterly gossip but remained united throughout the hardships of marriage and adulthood. The harmony among the women is insightful to the reality of family. Likewise, the men give us reflections on life as they consider the advent of fatherhood and laugh over their shared experiences courting and loving the Bennet sisters, who are all quite similar in their ability to attract dramatic courting ordeals, despite their recognizable differences in demeanor!

In addition to the witty commentary laced throughout the production and the reprise of sisterly affections, in her role as the unexpected heroine, Miss Mary Bennet explains an important phenomenon to Lord Arthur de Bourgh at the culmination of their romance. With his new inheritance of the Rosings Park Estate, Mary insists he has the remarkable gift of a choice where she has none. Rather than accept a marriage that is advantageous to the Estate, though void of happiness and love, he can choose to entertain an earnest pairing rooted in love – a freedom that Mary, as well as many other women, are not blessed enough to possess. She contends that this choice, “the most liberating possession of all,” must be used, for if not, one is not deserving of it.

In her role as Miss Mary Bennet, Porter-Phelps transmitted this message wonderfully. She embodied Miss Mary Bennet, emphasizing her strength, wit, and wisdom. Porter-Phelps upheld an intentionality in her performance that was admirable; truly consumed in the narrative, she beautifully and justly portrayed the transformation of Miss Mary Bennet’s confidence and clarity, a storyline to which most all can relate. Paired with Taylor, the two brought the awkward romance of Miss Mary Bennet and Lord Arthur de Bourgh to life. United in scholarly interest and curiosity about the world surrounding them, the characters find an unexpected love despite the dramatic ebbs and flows inherent to the Bennet family courtships. Taylor and Porter-Phelps brought a sentiment of “meant-to-be” to their characters’ unsuspecting romance, one reminiscent of all the Bennet sisters’ unlikely yet endearing and enthralling romances. Just as all adore the romantic union of Mr. and Mrs. Darcy and their ardent love in Pride and Prejudice, this production of Miss Bennet: Christmas at Pemberley affords a love story that all can support, enhanced with enough holiday joy to make everyone merry and bright.

The set, designed by Tab May, captures the beauty of Pemberley Estate, complete with the decadent Christmas tree and plentiful bookcase, and immersed the audience in its interior. With the single room to work with, the lighting designer, Shawn Hooper, has built fluid lighting transitions to differentiate scenes. In particular, the scene where Miss Mary Bennet and Lord Arthur de Bourgh write letters to one another in separate rooms was beautifully executed, owed in part to the creativity in lighting decisions. And, such light illuminated the costumes, designed by Tara Raczenski and RoseLynne Bowman with assistance from Molly McNair, which stayed true to Regency Era fashion and fit each character's personality perfectly. Led by stage manager Melissa Peller, the technical elements of the production enhanced the work of the actors and allowed the manner of their messages of love and family to be both nostalgic and contemporary.

With a nearly sold-out audience and high energy among guests, cast, production team, and staff amid opening night, the holiday spirit radiated throughout the lobby and the theater as we approach Christmastime. The theater, with just over 200 seats, was a setting deserving of such an intimate and energetic production. One felt as though they were in the drawing room at Pemberley, sharing in the celebrations and conversations of the Bennet family. Vaughan’s wonderful directorial interpretation, true to Pride and Prejudice and relevant to today’s audience, is a must-see for those fond of Jane Austen as well as those who have never read her work. This romantic holiday comedy exploring family, love, and personal transformation will enchant and enamor fans of Austen and newcomers alike.

Miss Bennet: Christmas at Pemberley continues through Sunday, December 19. For more details on this production, please view the sidebar.