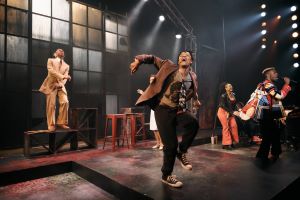 UNC School of the Arts' Department of Drama and Department of Design and Production are currently presenting the genre-busting rock musical Passing Strange, by singer-songwriter and performance artist Stew. The show is one of too few Broadway musicals that capture the African American experience as written and performed by African American artists. In fact, when it debuted in 2008, it was considered such an important part of the African American musical canon that filmmaker Spike Lee recorded and released the last three performances of the Broadway production. The production of Passing Strange at UNCSA reflects the School of Drama’s ongoing effort to broaden its programming to include more work created by historically underrepresented communities in the entertainment industry – and it succeeds gloriously.

With music direction by Dionne McClain-Freeney and stage direction and choreography by faculty members Christopher Burris and Krisha Marcano, respectively, the show is a dazzling mash-up of a rock concert, performance art, and musical theatre. It examines Black middle-class life unflinchingly, sending up stereotypes and skewering sacred cows while exploring the intersections of art, life, love, and "the real."

The performances, from the leads to the ensemble to the band, were outstanding, starting with the band’s pre-show music and kicking into high gear when Murphy Applin burst onto the stage in the role of Narrator. Exuding the charisma and swagger of a rock star in "We Might Play All Night," Applin set the expectation for the highest levels of performance and entertainment, and the energy never wavered.

Heidi, played ably by Jasmine Hurt, assists Narrator in the work of holding space for Youth’s journey through culture, time, and space. (These two represent the show’s creators, Stew and Heidi Rodewald.) The character Youth begins his very contemporary Hero’s Journey in the "big two-story Black middle-class dream" and has his early education under the "the pressure of the Baptist fashion show." In performing Youth, Deandre Sevon exhibited character development with a skill seldom seen on any stage.

Youth hears the Blues revealed in Gospel, although Mother disagrees with that assessment. His ecstatic experience of music keeps him in the church for a while as does the pulchritude of Edwina (Kennedy Jackson) and the pot-laced conversations in Franklin’s VW Bug after youth choir practice.

Maleek Slade was louche and seductive as Franklin. Slade and the other ensemble players performed multiple roles in the show, all of them admirably, showing range and versatility. It was as much a showcase for them as for the leads.

Bailey James was impressive in the role of Mother, effectively portraying a maturity beyond her years and a steely vulnerability as the character desperately tries to hold onto her only child. She doesn’t understand Youth, but her fierce love for him is obvious.

The strictures of religious life are unsustainable, and Youth soon unleashes his talent as a punk rocker in his band, The Stereotypes, with Terry (Seth McLaughlin) and Sherry (Aisha Sougou). In a show full of sly humor, this is one of the funniest scenes as Mother interrupts these vicious head-bangers with an offer of snacks.

That band morphs into psychedelia and the predictable mind-altering substances that go along with the genre.

To free himself from the expectations of friends and family and the racism of America, Youth launches himself on a European romp, following in the footsteps of such great Black artists as James Baldwin and Josephine Baker. Marianna (Kennedy Jackson again) welcomes him to Amsterdam by giving him her key – the key to not only her apartment but also a brave new world of casual sex, hashish, and burgeoning creativity.

Then, it’s on to Berlin, what the Narrator calls "A Black Hole with Taxis." Amsterdam’s easy loving gives way to anger, anarchy, speedier drugs, and the wise, wonderful, wild, and grounded Desi (also Aisha Sougou, who managed to make the character both bad-ass and nurturing).

A surprising challenge to the unfettered artist’s life comes in Berlin when all of Youth’s friends go home to their families in small hamlets and villages and he is left alone with his epiphanies.

In a particularly riveting number, Narrator sings "The Black One" while Youth and the ensemble dance in a clever send-up of the "magical negro" stereotype. Look for some great performance art moments by Sevon in "Identity” and Slade in "What’s Inside Is Just a Lie."

The conclusions of the narrative are wide-open to interpretation, but after mistakes are made and losses experienced, Youth and Narrator find healing in art and love. Youth gives Mother her moment of glory, understanding, and redemption. Narrator sings "Song is a balm, but song cannot heal." Only love can heal, and it’s never too late to learn that we don’t have to cut ourselves off from love to individuate and realize our creativity.

As always with UNCSA performances, the design and production aspects were spectacular – great lighting, set, costumes, and sound – except in the first act when one of the microphones seemed to be left on when it should have been turned off creating unfortunate static. That got cleared up as the show progressed, and I expect it will be better in subsequent performances.

The theater will be open at full capacity. Masks are encouraged but not required. The language and material are recommended for mature audiences.

Passing Strange continues through Saturday, April 2 (though is currently listed as SOLD OUT on UNCSA's website.) For more details on this production, please view the sidebar.