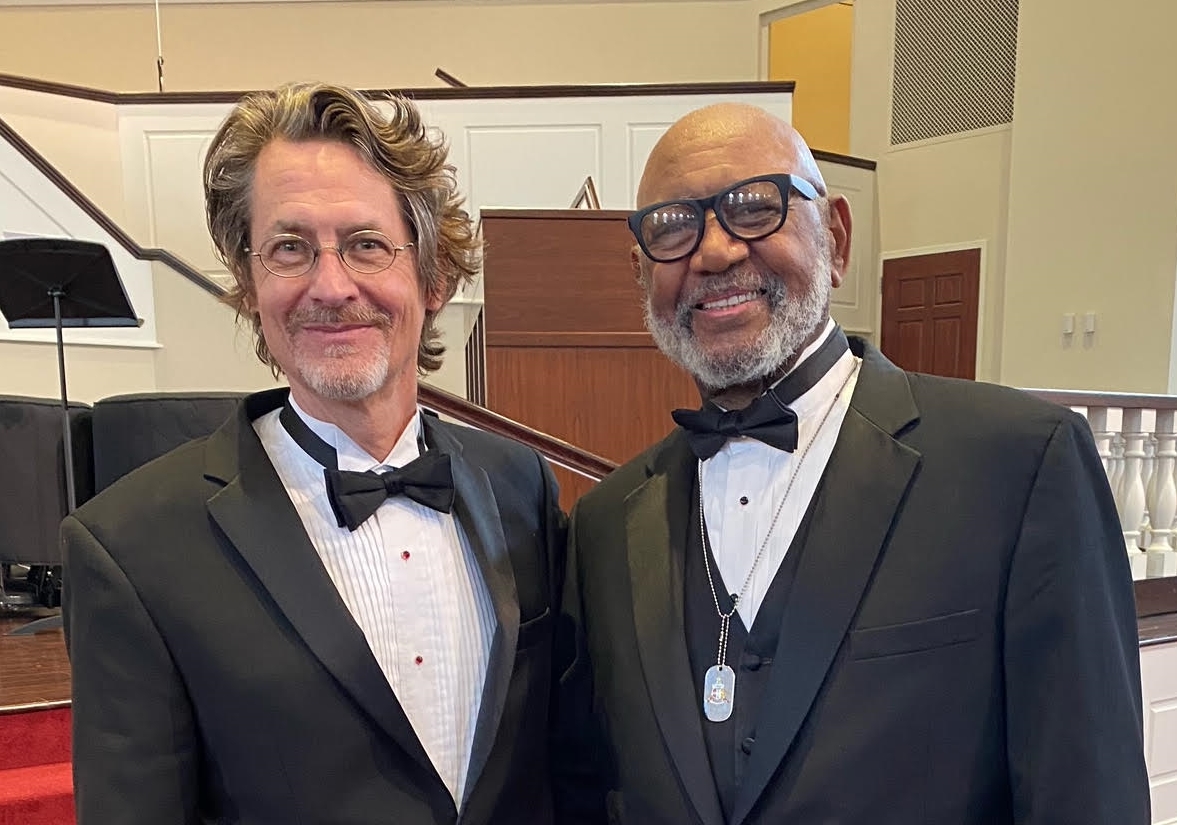 Although the North Carolina Master Chorale's 79th season was supposed to begin with "I Will Lift Up Mine Eyes" back in January, Covid delayed this auspicious program. Thankfully, the organization was able to move it to this past Saturday afternoon. The plan had been for there to be a collaboration with HBCU choirs at North Carolina Central University, but timing proved too difficult to join forces this time around.

We've been through a lot, haven't we? The thoughtful penetration and attention to programming in this concert was not lost on anyone in Christ Baptist Church on this afternoon. The 160-voice Chorale filled the choir loft as music director, Al Sturgis and guest conductor, Roland Carter entered together to take the substantial afternoon audience on this soul-healing musical journey.

The first portion of the concert, conducted by Sturgis, featured a small chamber orchestra, and began with Beethoven's majestic "Hallelujah" from Christ on the Mount of Olives. This is the kind of choral music NCMC always does so well and was a glorious way to start.

Following was David Conte's (b. 1955) setting of the Langston Hughes' poem "I Dream a World" with its lush sweetness. The string section created to beautiful effect the dreaminess of the setting. The choir gave a moving, hopeful, and uplifting interpretation.

"Meet Me Here" from Considering Matthew Shepard by Craig Hella Johnson (b. 1962) describes a healing process. It begins (and ends) with a soprano solo movingly sung by Casey Eaton whose clear, bright voice was especially suited for the Appalachian-folk/Sacred Harp nature of the piece. The trio of voices (Sarah Clement, Emma Lassiter and Kayla Pierce) effectively supported Eaton as did the warm, soulful sound from the Chorale. One could sense that they really felt this one. It was a very compelling performance.

Dan Forrest's (b. 1978) "i thank you God for most this amazing day" (e.e. cummings, poet) begins with what sounded as close to what I feel when beholding beauty in the world as I have heard expressed through music, at least in that moment. Kudos to pianist Susan Lohr for her transcendent playing. The ensemble displayed by the orchestra and singers was powerful in this broad sweeping, life-affirming setting. Although it was sometimes difficult to clearly understand the text (NCMC is still masked), the program notes were well done and helpful. The alto section particularly sparkled in this one!

Ending the first half of the concert was I Will Lift Up Mine Eyes by Adolphus Hailstork (b. 1941) featuring tenor soloist Antonio Chase. Composed in memory of Undine Moore Smith, this short cantata is a setting of three psalms and runs the emotional gamut. Chase was very musical, engaged, even smiling – seeming to enjoy his sharing. The sorrowful and achingly tender orchestral entry of the second movement, Psalm 13: 1-2a, 3 is expressed by the broken, mournful humming from the choir. (Well done!) Powerful orchestral scoring and a heavenly setting of Psalm 23 ended the first half and the orchestra left the stage. Throughout, Sturgis clearly and calmly held the confidence of both the choir and the orchestra in a way that was palpable.

Enter Roland Carter. A lion of the choral world, Carter is now 80 years old. Sturgis described the Chorale's short time with Carter as exhilarating and inspiring. (The day before, a small group of singers along with Sturgis and Carter had gone over to Durham's Riverside High School for a coaching session on singing the Spiritual. There, students were treated to Carter sharing highlights of his personal journey as musician and educator from the 1950s to today. What an opportunity!)

As Carter took the podium to conduct three of his arrangements, all eyes were fixed on him. And one could understand why: this experience was very different from what Chorale is used to. With the majority of the arrangements being a cappella, Carter did not so much traditionally conduct as ask for color and emotion from the choir.  He quite rightfully expected that they collectively and fully feel as well as sing the "spirit" of the music. They had to watch his every gesture to see what he wanted, and they did not disappoint.

I was struck by the solid rocking effect of "Ride on, Jesus," and the angelic nature of "Steal Away" with tempo and dynamic changes occurring as Carter interpreted in the moment, pulling from the Chorale something otherworldly. The soprano section's tone was especially beautiful and baritone Marshall Lynn's solo was strong. At one point Carter turned to the altos and pantomimed the bowing of a violin to get from them what he wanted. It was a beautiful moment.

"Rise, Shine, for the Light is A'Coming" brought back Chase who wowed with his sizable range and summoned intensity. Also impressive was the Chorale's intonation and ability to not rush, as this music requires a relaxed inner pulse, (ie: not on top of the beat) as one should expect with this style. Not an easy feat of ensemble for such a large group.

The set ended with Carter's original setting of the Langston Hughes' "Hold Fast to Dreams." Carter's interpretation felt poignant, as if he were quietly but tenderly warning to "put one wise" what can be lost. Almost cinematic in its setting, Carter employed something traditional to the African American spiritual – the use of both piano and church organ, played ably by Lohr and Stephen Aber respectively. Laura McCall had a lovely soprano solo that she sang with confidence and grace.

The audience was brought to its feet, having witnessed greatness in our midst and a heart-felt appreciation for the opportunity to have this cathartic moment. And… as they say… the choir said AMEN.

Thanks to all of the forces that came together to make this happen. Congratulations to NCMC on their 79th year. We can hardly wait to see what the 80th has in store!