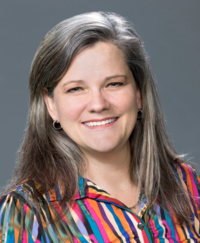 This article has been provided by the Appalachian Theatre of the High Country.

The Appalachian Theatre of the High Country is pleased to announce that veteran  arts professional Suzanne Messenger Livesay has been named executive director of the  venerable landmark on King Street in downtown Boone, NC. She will begin her tenure on August 1, 2022.

Board chair Keith Martin said that Livesay was the unanimous choice of both the search and  executive committees of the theatre’s board of trustees, and praised vice chair Bill Pelto, who led the national effort that yielded a local candidate for the position. Pelto said of the hiring,  “Suzanne brings to us the verve of an educator, the expertise of a manager, and the instinct of  an artist. I look forward to seeing her energies dedicated to enhancing the quality of the arts here  in the High Country.”

The Sugar Grove resident was formerly the vice president of education and community  engagement at the Straz Center for the Performing Arts in Tampa, Florida, the sixth largest  performing arts center in the United States. In that capacity, Livesay supervised 31 full-time and  50+ adjunct faculty and staff members while administering an annual $5,500,000 budget.  Previously, she served as both the theatre and music chair for the Patel Conservatory, also in  Tampa, theatre/choral director and department chair at The First Academy in Orlando, and fine  arts coordinator and instructor at the Geneva Academy in Deland.

Since Suzanne and her husband, Gil, relocated their family to the High Country during the  pandemic, she has been employed by the Watauga County Schools as a K-8 music educator at  both Bethel and Valle Crucis Schools. She told the App Theatre search committee that she fell  in love with the High Country in the 1990s when she was a featured soloist at The Farm House  in Blowing Rock while pursuing her undergraduate musical theatre degree at Stetson University  in Florida. Livesay also holds a Master of Education degree from Belhaven University in Jackson,  Mississippi.

Thirty select community stakeholders interviewed Livesay during the extensive search process,  which involved board trustees, theatre staff and volunteers, elected officials, and representatives of user groups who program events at the theatre.

L. Wright Tilley, executive director of the Boone and Watauga County Tourism Development  Authorities at Explore Boone, said, “Suzanne has the right personality and understands the  importance of the local community in the success of the theater. Being an educator, she is used  to getting feedback from multiple sources (administration, students, parents, etc.). The fact that  she has already been living and working in our community for a couple of years will be very  helpful."

Boone Mayor Pro Tem and theatre volunteer Edie Tugman echoed those comments by saying,  “Ms. Livesay is a lovely presenter: articulate, energetic and knowledgeable. She would be a  good representative of the theatre in the business community as well as engaging with the  general public. It is amazing that one with the caliber of Ms. Livesay's experience is so readily  available.”

"Suzanne has the right background and personality for the job,” said David Jackson, president  and CEO of the Boone Area Chamber of Commerce. “She is someone who can trumpet the  mission of the Appalachian Theatre well, while also thinking about how the organization can be  a benefit to others in our community. The seeds are there for this to be a signature moment in  the theatre's history."

In accepting the position, Livesay remarked, "I'm delighted to join an exceptional board and  staff to share my leadership, expertise, and appreciation for Boone's unique culture while  molding the Appalachian Theatre of the High Country into a premiere destination for the  performing arts.

"The extensive theatre renovation and restoration took into account every facet of an  outstanding performance venue while honoring the historical integrity of the space,” said  Livesay. “It really is something to experience and behold."

Speaking from the perspective of the App Theatre's user groups, Julie A. Richardson, Blue  Ridge Community Theatre board chair, was one of over a half-dozen local arts organizations  who met with Livesay during the candidate interview process.

"I'm impressed at how members of the Livesay family have jumped into our arts community since  arriving in the High Country a few years ago," said Richardson. "Suzanne is a music teacher in  the Watauga Public Schools, and her daughter Micah has performed in shows at both App State  and Lees-McRae College. With an extensive background in producing and directing theatre  productions, Suzanne knows firsthand the challenges that user groups face when mounting their  own plays and musicals; she will be an effective advocate for local performing arts  organizations."

About the Appalachian Theatre

The mission of the Appalachian Theatre of the High Country is to revitalize and sustain this historic  community touchstone as a quality home for diverse artists and audiences with a special focus on  programs that celebrate our distinctive Appalachian heritage and enhance our capacity to serve as an  economic catalyst for Boone and the High Country. Once a gorgeous 999-seat Art Deco movie house,  the building closed in 2007 and sat empty and gutted for years. On October 14, 2019, the Appalachian  Theatre reopened its doors after a $10 million renovation that brought the distinctive Art Deco details  back to this historic theatre and created a new 629-seat, state-of-the-art, acoustically pristine venue for  live concerts, films, plays, and dance performances. The historic Appalachian Theatre has entertained  regional audiences in the heart of downtown Boone, North Carolina since 1938. www.apptheatre.org