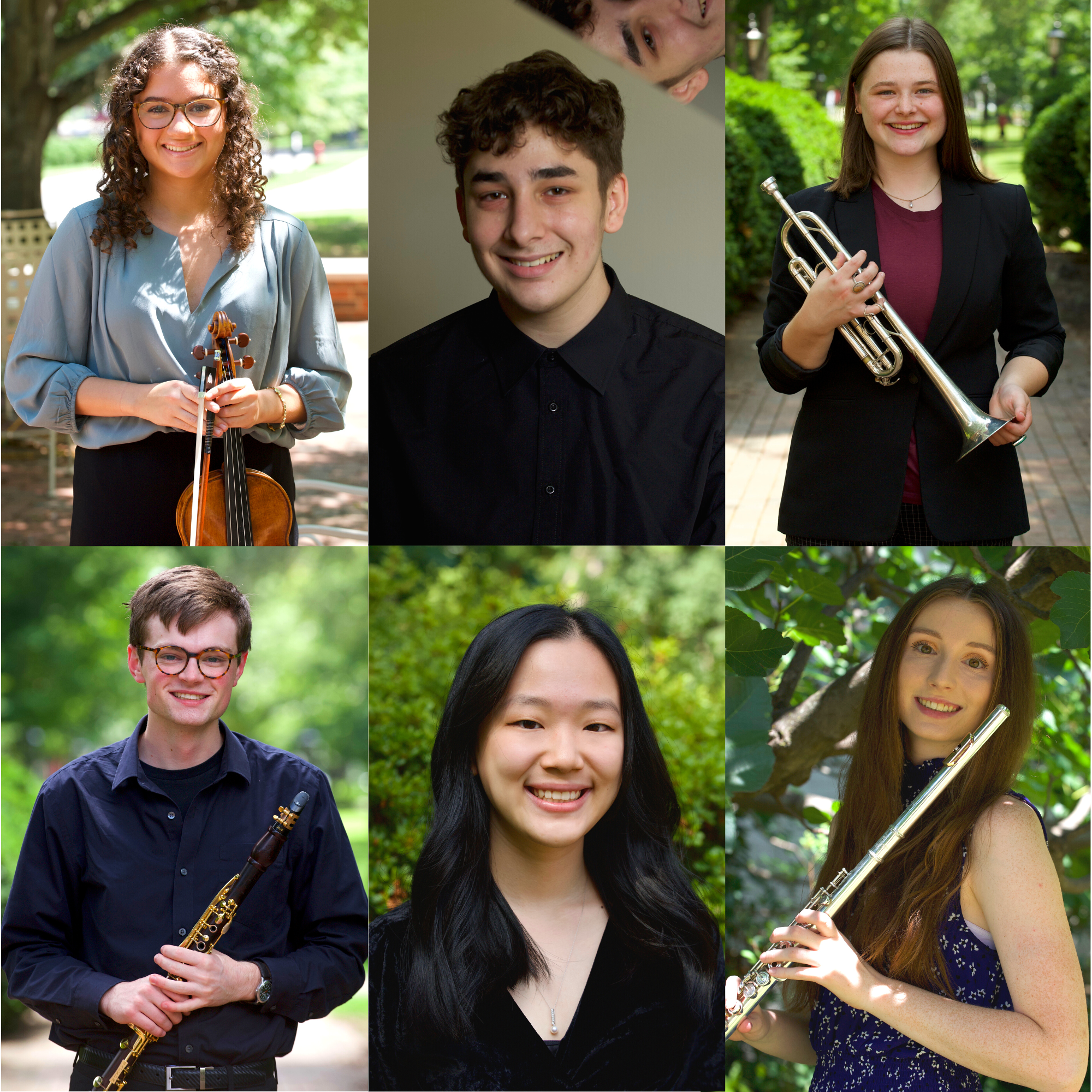 Eastern Music Festival (EMF), a nationally recognized music festival and summer educational program based in the heart of North Carolina, announces six young musical artist winners of the 2022 Concerto Competition. Over 60 students competed in the Festival’s annual competition. All six winners will perform their respective concertos on Thursday, July 28, at 8 p.m. in Dana Auditorium at Guilford College.

This year’s winners performing their competition concertos on July 28th are:

Victoria Bramble, 19 (West Palm Beach, FL), will be performing Sibelius’s Violin Concerto, (mvt. 1). Bramble currently studies at the Lynn Conservatory of Music with Elmar Oliveira. She grew up listening to her mother playing the violin at home and started her own musical journey at age four. She’s been invited twice to work with Itzhak Perlman alongside members of the Perlman Music Program as part of their Winter Residency and performed in the Florida All-State Orchestra for 5 years. With a passion for orchestra, Victoria has been a part of side-by-side ensembles with the Chicago Symphony Orchestra, National Symphony Orchestra, and New World Symphony as well as serving in the concertmaster position during her time at Dreyfoos School of the Arts. Previous summers have brought her to Sphinx Performance Academy at Curtis Summerfest, National Symphony Orchestra Summer Music Institute, and the National Orchestral Institute. As for chamber music, Victoria has won first place awards at the Florida Federation of Music Clubs Junior Festival 2017-2019 and first place in the Lynn Conservatory of Music 2021 Chamber Music Competition. Bramble has been studying with faculty artist Avi Nagin at EMF this summer.

Ann Gao, 17 (Maumelle, AZ) will be performing Chopin’s Piano Concerto No. 2, (mvt. 1). Gao currently attends Little Rock Central High School. She studies piano with Dr. Naoki Hakutani (University of Arkansas at Little Rock). She was the Grand Prize winner of the 2021 Stella Boyle Smith Young Artist Competition and performed as a soloist with the Arkansas Symphony Orchestra. She was also the Arkansas winner of the Music Teachers National Association Competition (Senior Piano Division). Gao also plays flute and is Principal Flutist of the Arkansas Symphony Youth Orchestra and Arkansas All State Orchestra. Gao has been studying with William Wolfram at EMF this summer.

Grace O’Connell, 20 (Madison, WI), will be performing the Böhme: Trumpet Concerto, (mvt. 1). O’Connell is currently completing a degree in trumpet performance at Middle Tennessee State University. She is a diverse musician performing with the Southern Stars Symphonic Brass Band and is a regular addition to the Huntsville Symphony Orchestra trumpet section. Grace has also performed with Blueprint Music Ensemble, La Musica Lirica, and the Quad Cities Symphony Orchestra Brass Quintet. She was twice named winner of the National Trumpet Competition, winning the Undergraduate Solo Division in 2022 and three years prior, winning the High School Solo Division (2019). This past spring, she was first place winner of the Young Artist Division of the Music Teachers National Association Solo Competition, Semi-Finalist of the Roger Voisin Memorial Trumpet Competition, and second place in the International Women’s Brass Competition. As a freshman in college, Grace was the Co-Winner of the 2020 Solo Competition of the International Trumpet Guild as the only finalist from the United States. O’Connell has been studying with faculty artists Michael Bluntman and Paul Randall at EMF this summer.

Andrew Reveno, 16 (Atlanta, GA), will be performing Grieg’s Piano Concerto in A-minor, (mvt. 1). Reveno is a 16-year-old classical pianist who will be attending Interlochen Arts Academy for 11th grade in the Fall. He was born in California and later moved to Oregon where he began playing piano at age 9 with teacher Martin Nolan. In 2016, Andrew again moved with his family to Atlanta where he studied regularly with Dr. Laura Gordy of Emory University (retired) and later with Dr. Yakov Kasman of University of Alabama Birmingham (1997 Van Cliburn Silver Medalist). Accompanied by Dr. Laura Gordy, Andrew placed 2nd at the 2022 Georgia Music Teachers Association Pre-College Piano Concerto Competition. He also received the “Artistry” award at the 2021 Decatur Music Teachers Fall Festival and the “Outstanding Performer” honor at the 2021 Atlanta Music Teachers Association Romantic-Impressionistic Piano Competition. Reveno has been studying with faculty artist Santiago Rodriguez at EMF this summer.

Brooke Walden, 19 (Westfield, NJ), will be performing the Hüe Fantasy. Walden recently finished her sophomore year at the Eastman School of Music under the mentorship of Bonita Boyd and Anne Harrow, where she held principal positions in the Eastman Symphony Orchestra, Wind Orchestra, Wind Ensemble, OSSIA New Music and the Opera Theatre. Walden previously studied with Zara Lawler at the Manhattan School of Music Precollege, where she was Principal Flute and Piccolo in the Philharmonic Orchestra. As the winner of the Westfield H.S. Bands’ 6th Annual Concerto Competition, she made a solo debut performing Doppler’s Hungarian Pastoral Fantasy. During high school, Walden was selected on both flute and piccolo to perform with the NAfME All Eastern Honors Orchestra and the NJMEA All State High School Wind Ensemble & Orchestra. Walden has spent her summers at the Sewanee Summer Music Festival, the 2020 Linda Chesis Virtual Flute Retreat and ARIA International Summer Academy. Walden has been studying with faculty artist Jake Fridkis at EMF this summer.

The annual Concerto Competition performance is a highlight of the EMF season. Resident conductors Grant Cooper and José-Luis Novo will lead the Young Artists Orchestra in the evening’s celebratory concert. For tickets and performance details, visit easternmusicfestival.org.

For six decades, Eastern Music Festival (EMF), a nationally recognized classical music festival and summer educational program, has been produced each summer on the campus of Guilford College and other venues in the Greensboro, North Carolina, area. EMF is distinguished by its accomplished faculty, exhilarating repertoire, and world-renowned visiting artists under the artistic direction of Gerard Schwarz. A powerful teaching institution, EMF provides encouragement and guidance to hundreds of young musicians from across the country and around the globe as they take their first steps towards careers in the performing arts. EMF’s five-week 61st season is June 25 - July 30, 2022. For more information, visit easternmusicfestival.org. Follow EMF on Facebook, Instagram,Twitter, and YouTube.