Toni Stone at Three Bone Theatre is a Home Run 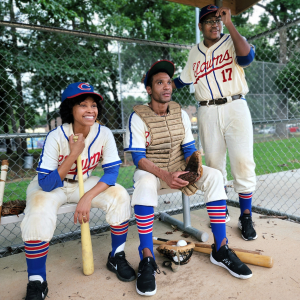 Charlotte knows Three Bone Theatre for producing the unconventional. Like any theatre company, they want to entertain their audiences, but they also want to expose them to something unique. Toni Stone, a play by Lydia R. Diamond, tells the story of the first woman to go professional in the Negro leagues, minor and major league baseball associations for Black players in the 1920s-1940s. With that kind of an accomplishment, one has to wonder why most people never have heard the name Toni Stone before? Three Bone Theatre aims to remedy that with their production. They have produced a compelling show that eloquently explores what it means to be a woman, Black, and an athlete – and how to be all three at once. Their partnership with the Girl Scouts, Hornets' Nest drives their commitment home. Toni Stone at Three Bone Theatre does more than put on a good show. This production wants to produce some change.

The set for this production is minimal, but effective. It is a multi-faceted playing space for the actors, literally. Each section defines an aspect of Stone's life, from childhood to womanhood. The main focus of the stage is, of course, the baseball field. The costume design by Kara Harman is similar in execution: nine clean baseball uniforms (rented from the Milwaukee Repertory Theatre) and accessory pieces that serve to communicate changes in character. The more complex costuming is for the roles of Alberga and Millie, for whom costume stylist Dee Abdullah has succeeded in creating depth of character through rich textures and colors. I was amazed to see how the powerful lighting design by Jennifer Wynn O'Kelly elevates the simplicity of the set. O'Kelly masterfully has created isolated moments for Toni that brought the audience into an intimate headspace with her. These were incredibly vulnerable and moving.

In fact, the cast of the show must be commended for their vulnerability as well. This ensemble felt so complete and well-formed that one could very well imagine them hopping off the stage to go play baseball after curtain call. Toni Stone and her eight ballplayers are delightfully witty and strong vehicles for the story, making the audience laugh and gasp with seamless beats. Of course, if this cast is a force to be reckoned with, Stone (Nasha Shandri) is at the wheel. Shandri treats Toni Stone with a visible respect and reverence, never losing touch of who she is, quirks and all. She charmed the audience with her character's physicality, boldly capturing the baseball icon. The cast of characters in Stone's life are the strong foundation upon which Shandri's Toni shines.

A feat like this is only accomplished through great direction, and Dr. Corlis Hayes had a clear vision of the kind of story that Toni Stone is. The staging was eclectic, exploring the angles and depths of the playing space. This allowed the small stage to become a world as large and vivid as Toni Stone described it. The clever staging of the baseball games is one example. Choreographed by Melissa McDaniel Grisham, these scenes manage to capture the excitement of a baseball game, without any balls being pitched. Dr. Hayes and the creative team have created a production that felt real and breathing, and they succeeded in immersing the audience in the world of the play.

Three Bone Theatre's Toni Stone is, at first sight, the story of a woman, who is an athlete, and who is Black. But, once audiences inspect deeper, it is about being a human. It is about a person who is all of those labels and still holds an unstoppable fire underneath her baseball jersey. Three Bone Theatre, once again, tells a narrative that their community needs to hear. And they succeed.

Toni Stone continues through Saturday, September 3. For more details on this production, please view the sidebar.