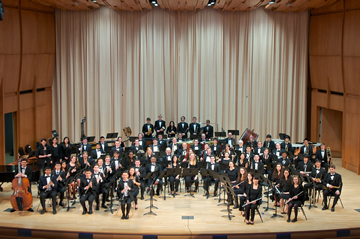 Duke's Wind Symphony, a crack ensemble of 70+ members directed by Verena Mösenbichler-Bryant, offered a Baldwin Auditorium concert entitled "Crowdsource" on a cool Thursday evening. Attendance was sparse downstairs but the balcony – where the sound is said to be best –  was generously filled. (A band this size can produce a great volume of sound in a confined space, but from start to finish it was very nicely managed.)

The title refers in this instance to audience participation in terms of picking part of the program line-up: attendees voted for two of four possible final numbers.

There's much to admire in wind band repertory and performances, too, and the Triangle is richly endowed with such ensembles. It says something – we could perhaps debate what it says (and why) – that there tend to be "newer" compositions and arrangements on wind band programs than more mainline orchestral evenings. And it says still more that for this concert, students picked the music that wasn't voted on by the audience – and with one exception, those student selections were all modern pieces. (So much for the notion that young people don't care for contemporary fare.)

The relatively short program began with Alfred Reed's concert overture "The Hounds of Spring" (1980), inspired by the Swinburne poem that was reprinted in the program.  The director led a brisk, crisp performance, one marked by excellent clarity, balance, and definition, with superior intonation, ensemble playing, phrasing, and attention to dynamics. (The young musicians actually seemed to watch the director and responded with remarkable speed to her indications.)

P.D.Q. Bach (1807-1742) was responsible, if that's the operative word, for "March of the Cute Little Wood Sprites," for which the players were certainly due extra pay, since there was extensive doubling of instrumental work with vocal lines, too. "Cute" is appropriate, although curiously the piece did not evoke the gales of laughter other compositions curated and brought forth over the years by Professor Peter Schickele (b.1935) have elicited.

Julie Giroux's magnificent tone poem "La Mezquita de Cordoba" celebrates the history and wildly diverse culture of the old Andalusian city and its smorgasbord of religions (mezquita being "mosque"). This score is every bit as rich and colorful as Albéniz's Iberia, those somewhat better-known tone pictures of Spain, and as handsomely set as some of Rimsky-Korsakov's music. It received a vibrant rendition.

Following intermission there was music actually by Rimsky-Korsakov (1844-1908) in the form of the well-known "Procession of the  Nobles," from Mlada. Once again, the playing was at very high levels of accomplishment, aided and abetted by Mösenbichler-Bryant's attentive conducting.

Those crowd-sourced pieces turned out to be Bizet's Carmen Suite, as it happened the evening's most substantial and extended work, and Edwin Franko Goldman's charming "Cheerio March (Sing and Whistle)," for which additional doubling fees are assuredly due the members of the band.

The enthusiastic response elicited as an encore Sousa's "Washington Post" March (1889), actually named for the newspaper – it had lost in the voting to the Goldman. (Lost completely was Verdi's overture to La forza del destino, which garnered only half the votes accorded the Carmen excerpts.)

A reception capped the program. Very nice work, all 'round!

One aside: Were I working for this group, I'd press the students into writing the program notes, as Harry Davidson routinely does with the members of the Duke Symphony Orchestra. As it was, there were some notes from various sources but no composer/arranger dates, etc.

Note: Mösenbichler-Bryant also conducts the Duke Medicine Orchestra, the next concert of which will be given in Baldwin Auditorium on Dec. 9. For details, click here.