The Other Side of My Heart: A Musical Journey Reflecting a Real One 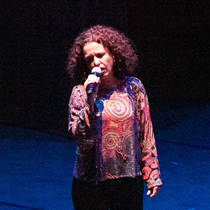 For the past thirty-two years Mallarmé Chamber Players' remarkably creative and unique programming has become almost a repetitive and boring cliché. But here I go again touting another concert by this gem of a performance ensemble. As is often the case, these concerts go beyond the purely musical and branch out and delve into aspects of our community. This performance, called "The Other Side of My Heart," is a musical, poetic and visual examination of immigration and how it affected those who gave up everything to relocate in the United States. Presented at the Eno River Unitarian Universalist Fellowship (ERUUF) in Durham, this program was a celebration of the Hispanic culture in North Carolina as well as a showcase for the enormous and far-reaching influence of their music, plus some great original works.

The program was in two rather lengthy parts separated by an intermission. Part 1, La otra parte de mi Corazon (The other part of my heart) featured original works by bassist/pianist Alejandro Rutty, an associate professor in composition in the UNCG School of Music, Theatre and Dance. The program began with an atmospheric and evocative vocalise called "TRANSFORMATION: A Vocalized Memory." Singer Lorena Guillen, pianist Adam Ricci, and guitarist Guy Capuzzo laid the groundwork for the general feeling and affect of the evening: mostly minor key music tinged with wistfulness and a sense of remembrance. Felipe Troncoso, born in Chile and currently teaching Spanish and film studies at UNCG, presented his photographs as an effective backdrop to the music.

The major work of the evening concluded the first half: The Other Side of My Heart, a large song cycle by Rutty, lyrics by Guillen, that is based on real stories of six Latino women that immigrated to North Carolina. We hear the actual voices of the women followed by their words, in Spanish and English, blended into the songs. The full instrumental ensemble of voice (Guillen), flute (Alma Coefman), electric bass (Rutty), piano (Ricci), guitar (Capuzzo) and percussion (Fernando Martinez-Lopez) performed. The five songs deal with simple but powerful concepts told with an elemental earthiness that ranges from heartbreaking to life-affirming. The original music has some degree of derivative styles from all genres of Hispanic music, but that is to be expected. The playing was cohesive with seductive rhythms and plaintive harmonies.

The second half, subtitled Mi Corazon en otra parte (My heart elsewhere) was a more eclectic and mixed selection of Hispanic works, but it started in the same manner as the first half with the wordless "FRAGMENTS: Echoes from the Past." Much of the music and sentiments in this part of the program were reflections on assimilation into the U.S. culture, but with strong emotions and memories remaining with their birth cultures and country.

Three of the works played were by Astor Piazzolla, the late Argentinian who became arguably the most well known Hispanic composer. The excellent flutist Coefman had a very full plate for this concert (perhaps even more than a solo flute recital!), but the highlight may have been her performance of Piazzolla's "Ave Maria" on alto flute. This relatively rarely played instrument brings forth a deep and sensuous sound that Coefman handled with exquisite skill and sensitivity.

We also got to hear from Oswalda Estrada, a wonderful singer and narrator who added a bit of the stereotypical Latino macho swagger to the program. But his recitation of his own poem "You'll Never Forget" was equally compelling and emotional. Coefman again played with great expression in "Oblivion," one of Piazzolla's most profound and melancholy works.

Rhythm and the unique percussion instruments used in Latin music are central to its character and sound, so attention must be brought to Martinez-Lopez for his sometimes nuanced sometimes brazen playing of his numerous instruments.

Much, well nearly all, of the music had a triste quality that of course reflects the hardships of tearing down your present life and starting anew elsewhere. Only speaking musically, that has the potential to get a bit tiresome in a two-hour program. But, as if the musicians realized that, they saved the ending to reflect an upbeat, positive and hopeful message. The finale, "Tiempos Viejos" had all the musicians joining in to reflect on old times but with confidence in the future and that the right choice was made.