Anatoly Larkin Leads Journey through a Century of Russian Music 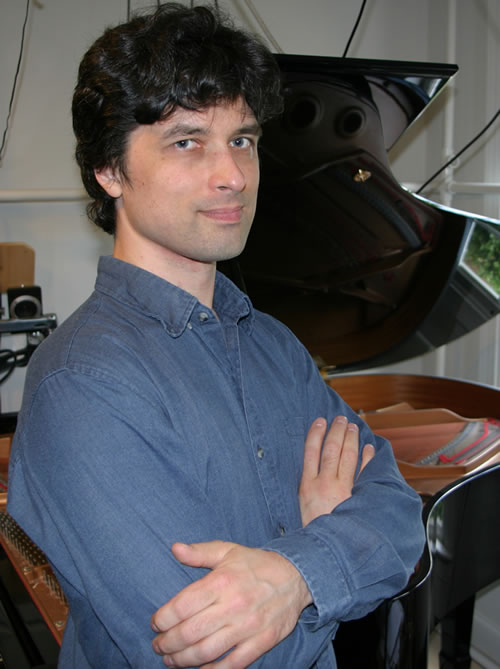 
Anatoly Larkin will survey a century of Russian repertory.

Chamber Music Raleigh's 75th concert season opened with a comprehensive journey through Russian solo piano music from the mid-19th to the mid-20th century, presented engagingly by pianist Anatoly Larkin. This concert was also the first of the "Sights and Sounds on Sundays" series, and Jackson Cooper, CMR's new Executive Director, made the exciting announcement that the North Carolina Museum of Art is now Chamber Music Raleigh's permanent home.

What better way to open the season than with piano music of the Russian masters? Larkin performed 17 short pieces by 17 different composers, all in chronological order by when they were written. In addition, he provided various tidbits about each composer and piece – where in Russia they lived at the time, their portrait, and the date the piece was written. Not coincidentally, all of these pieces were written when the composers were in their early thirties – typically near the beginning of their careers. Besides all of these facts, Larkin made his program engaging by also providing a wealth of information off the cuff – information that seemed random (such as who was friends with whom, dedications of pieces, etc.) but actually informed the performances quite well.

The program began in 1839, on the more conservative side of the Russian Classical/early Romantic movement. Mikhail Glinka was an appropriate first choice, since he is regarded as the father of Russian Classical music and influencer of "The Five," or "The Mighty Handful". Glinka's nocturne "La Séparation" is warm and gentle, featuring a romantically mournful melody with moving notes underneath. From the beginning and throughout the concert, the amplification of the piano for the space seemed very effective, making a concert that was already in a relatively small space even more intimate. In stark contrast from the previous nocturne, lesser-known composer Dargomzhisky's "Scherzo" is capricious and impulsive. Larkin's expression here, pausing before diving into each humorous phrase, was quite effective.

A particular highlight from the middle of the concert was Anton Arensky's Impromptu, Op. 25 No.1. This piece contained one of the most beautiful melodies of the concert, and Larkin did this justice with his marvelous sense of rubato and listening for the melodic line. Rebikov's "Déclaration d'amour," the beginning foray into the 20th-century Romantic/Modern period, was also naturally passionate, but with more innovative harmonies that gave it underlying restlessness. It was contrasts and differences such as this that made Larkin's program choices all the more convincing, as he clearly showed the changing trends of Russian piano music over an entire century.

Igor Stravinsky is known widely for his ballets and other orchestral music. However, Larkin managed to unearth a rare solo piano piece from the beginning of Stravinsky's career. His March from 1916 is heavily punctuated and fanfare-like, and as Larkin explained, was written partially to mock the proceedings of war. As in the previous pieces, Larkin captured this humor quite well. He ended the concert with the more atonal pieces of the Modern period – Polovinkin's dynamic "Foxtrot" hinted at what might lie ahead for mid-20th century Russia. By the end of the concert, Classical music aficionados and novices alike had enjoyed a fascinating walk through 100 years of Russian piano music.