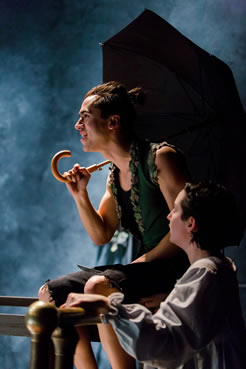 When director Lillian White assembled her cast of eleven for Burning Coal's production of a new interpretation of J. M. Barrie's Peter Pan, it was with the understanding that this cast would, in effect, write their own script based on the novel, rather than depend on an already written script. This new interpretation, running now at the Burning Coal Theatre in the Murphey School, is titled Peter Pan & Wendy, and it differs quite a bit from the usual Peter Pan fare. While this new script is completely true to the novel, it steers away from the Disney-esque, carefree lark of a show that has made its way to stage and screen before now. But this script does two things others have not: it taps into some of the darker – some might even say more sinister – aspects of the novel, and it focuses on Wendy's progression through the novel, from the babe who heard tales of Peter Pan from her mother, to the young girl who dreams of a child of her own, to Wendy's visit to Neverland and some very dark adventures with Peter, to the time she has grown to an adult, with a young daughter of her own.

While it looks more deeply into the novel itself, this script does maintain the "youthful adventure" feel, the deeply felt allure of Neverland, and the ultimate adventure of battling pirates. But we see in this script more of the characters' deeper emotions: the need by Wendy (Shawn Morgenlander) for Peter (Alec Silver) to be more for her than a "devoted son," the grief and sorrow of the Darlings at the loss of their two children, and some of the deep-set reasons why Peter is as he is – why he will never grow up, and why the story of Peter Pan is so cyclical. And you will see in this script a new and novel aspect, that of a female Captain Hook (Julie Oliver)!

All of the characters we are used to are here, but a couple have been added: Summer Maid the mermaid (Holly Holmes), and the character who "tends the birds on the island," named Tsi-la (Kaley Morrison). Tsi-la is the one who leads the lost boys out of Neverland once Wendy decides it is time to go home.

Since this is an ensemble cast, more that half of the cast has more than one character to play. Depending on the scene, the actors playing the Lost Boys might be lost boys, or they might be pirates. It is also possible that they carry out other essential roles; wait til you see how Peter gets Wendy and John to "fly!" Mr. and Mrs. Darling in scenes played out in "reality" have far different roles in Neverland. Mr. Darling (Mark Filiaci) morphs into a crocodile and Mrs. Darling becomes the first-ever Sylvia Hook! And one particular actress, Holly Holmes, takes on three major roles at once: Jane, Wendy's daughter; Tinkerbell; and Summer Maid, who has quite a major dance sequence to perform (in water!).

Director White makes sure that enthusiasm and lightheartedness remain high, even when Tinkerbell, who is very jealous of Wendy, causes one of the Lost Boys to shoot her in the heart with a bow and arrow! How in the world Wendy survives is a secret that will not be revealed here.

Each and every character takes on the singular aspect of being in a fairytale, even if this is one like no other. But not all is lighthearted: Mrs. Darling, for example, is horribly grief-stricken, and she blames her husband for the loss of their children. Hook, at the precise moment of his (er, sorry – her) imminent victory, becomes melancholic and introspective. And the terribly wistful look of sorrowful understanding on Wendy's face at the close of the play will stick with you – count on it!

But there is still a huge amount of fun to be had in this production. Take, for example, the building of the home the Lost Boys make for Wendy – they use Wendy's bed! And the way Peter saves the life of Tsi-la when she is captured by the pirates is classic. There is a balance in this production of light and dark. We even learn a little bit about Peter before he came to Neverland. Peter Pan & Wendy is a different sort of fairytale, one that taps into the heart and all of its emotions, good and bad alike.

This new interpretation of the Peter Pan story is one that remains true to J. M. Barrie's novel, while also indicating that life, even for a young boy or girl, is not all fun and games. Peter Pan & Wendy brings more of Barrie to Peter Pan, making him far more real to us than just a little boy who refuses to grow up. I predict that this one is a Peter Pan for the ages, and you can catch this new work right now, before the ink is even dry on the script!