An EMF Runout to the Appalachian Summer Festival 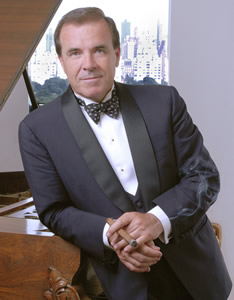 Every summer the Eastern Music Festival leaves its home at Guilford College in Greensboro and heads for the hills. To be more precise, the faculty orchestra, the Eastern Festival Orchestra, gives a reprise of a Saturday evening program the following day, on Sunday afternoon. The locale? The Appalachian Summer Festival, housed "on and around the campus of Appalachian State University" in Boone.

If one word could describe the concert, it would be "color." The performance took place in the Schaefer Center for the Performing Arts, an acoustically vibrant hall, perfect for the literature chosen by Music Director Gerard Schwarz.

It is the centenary of the birth of Leonard Bernstein (1918-90), so it was perfectly fitting that the concert begin with the Overture to Candide (1956). The five-minute piece energetically kicked off the festivities. This is a work that brims with enthusiastic energy and good humor. Maestro Schwarz urged the members of the EFO to give their all in this no-holds-barred rollicking concert opener.

Charles Tomlinson Griffes (1884-1920) is probably best known as the "American Debussy." Griffes' proclivity for the subtle impressionistic style is no better heard than in The White Peacock (first written for piano, 1915, then arranged for orchestra 1919). Lush sonorities provide a sheen to this short gem. Wind solos magically appear out of murmuring strings. Add a harp and, voila!

George Gershwin (1898-1937) had a giant hit with his Rhapsody in Blue, written for Paul Whiteman in 1924; one immediate result was the commissioning of a piano concerto by Walter Damrosch, the New York Symphony Society conductor. In the afternoon performance in Boone, the acclaimed pianist Misha Dichter served as soloist.

The entire score is infused with jazz elements, which is obvious from the outset. The opening Allegro begins with the timpani, which ushers in the riff-ridden orchestral introduction. Soon the piano enters with its own rhapsodic meanderings, which will be heard several times in the course of the work. The movement moves towards a climax that brings back a previously-heard tune Hollywood style. A virtuosic cadenza provided Dichter an opportunity to demonstrate his impressive chops.

The second movement begins slowly; a blues-tinged affair featuring solo trumpet, impressively performed by Chris Gekker. The piano joins in when the tempo livens. The harmonies sound quite a bit like, well, Debussy. The trumpet blues returns, but the ending features both full orchestra and piano in what sounds much like an American Rachmaninoff.

Throughout the work Dichter (who used a score) displayed luminous playing, coupled with sensitive and nuanced lyricism. Maestro Schwarz was with the pianist every step of the way, with a great sense of camaraderie.

The second half of the concert was given over to two works by Maurice Ravel (1875-1937): Tzigane, rapsodie de concert (originally written for violin and piano, 1924 but also immediately arranged for violin and orchestra) and the Suite from his ballet Daphnis et Chloé (1912).

Tzigane (Gypsy) was inspired and commissioned by the British-Hungarian violinist, Jelly d'Arányi. It is a work that really holds the soloist's feet to the fire. In this case, the soloist was Eva Wetzel, an undergraduate student at the UNC School of the Arts and 2017 winner of the Rosen-Schaffel Competition for Young and Emerging Artists.

Wetzel's playing was amazing. The opening half of the piece is for violin solo in a quasi-improvised frame, and it is a virtual compendium of extended violin techniques. Double stops, harmonics, blistering-fast arpeggios? No problem for this young star. Her dramatic playing, with pregnant pauses, was impressive. Again, Schwarz masterfully negotiated the frequent changes of character when the orchestra joined in. Great playing from both soloist and ensemble although sometimes her playing didn't cut through the orchestra.

Ravel would probably have bristled at being labeled an "impressionist," but his Daphnis et Chloé Suite would certainly help make the case. This is for a huge orchestra (including augmented percussion and two harps), with lots of juicy solos, especially for the winds and the principal violinist, Jeffrey Multer.

Often the music is nebulous, shrouded in mystery: shimmering textures over which snatches of melodies can be heard. Schwarz's conducting is wonderful to watch. Often, he seems like a magician, conjuring up different hues from the orchestra with a wave of his hand. His ability to shape this terrific orchestra is amazing, expertly shading the dynamics to the softest level one moment, while in the next, prodding the ensemble to thrilling climaxes.